Cleethorpes AC. enjoyed one of their best Championships in many years in a well-attended competition of over 300 runners, winning nine individual medals and seven sets of team awards.  Ella Greenway took the first Gold for Cleethorpes by winning the U13 Girls event with an excellent run over the 2700m course in 10mins 36secs and then  Robyn Greenway followed this by winning her Gold medal in the U15 Girls event over the  4320m of her race, both of them earning the distinction of being two Humberside Champions in the same family at the same event.

The third Humberside Gold medal came in the Senior Women’s race where Beverley Wilson added to her many Gold medals in this event by winning the Vets’ race in 34.31s. for the 8000m course.

At Biscathorpe Grace Sullivan had an excellent run over a demanding course to win the Gold medal in the U15 Girls race in the Lincolnshire Championships.

The U17 Men’s race brought a well earned reward for consistently good running to Jordan Carlile with the Bronze medal.

The final individual medal came in the Senior Women’s race where Sarah Edwards ran a fine race to take the Bronze Vets’ medal.   The team competition throughout the day’s 10 races brought many good results for the Club  showing  great strength in depth.

Chloe Phillips (2nd) led in the team of Emily Davies (6th) and Matilda Carrotte(7th) to win the Silver team award and in the U11Boys it was Gold for Cleethorpes with Mert Ozguder (4th), Munro Pearson (9th), and Ben Edwards (10th) well backed up to come in as 4th Team by Robin Smith, Jack Wright, Max Holness, Oliver Parker and Daniel Smith.   The U13 Girls team also won the Gold medals.  Ella Greenway was first to cross the line with Katelyn Howden(4th), Madeleine Cartwright(5th) followed  very closely by Charlotte Davies (6th) and Aurelia Pearson(11th), all contributing to a fine team performance.   Six runners made up the two team results in the U13 Boys.  Positions 5, 10 and 12 respectively  saw George Gale, Joe Carrotte,and Miles Peck claim the Silver Award and William Parker, Jordan Wilson and Daniel Payling produced a second team in 5th place.

The U15’s Boys and Girls results were excellent.   Both won Gold.   The Girls through Robin Greenway,  Devon Low, Louisa Howden and Amber Laycock taking 4 out of the first 10 places and the Boys with Lewis Phillips, William Gale and Ben Muir, 1st, 3rd and 6th for the first team, with Dominic Carwright, Nathan Smith and Jack Pritchard(10, 12, and 13th) winning the Bronze award.

The U17 Women’s event saw two Cleethorpes runners for the Club.  Molly Ward was just out of the medals in 4th Place and Jessica Jex earned a well-run 7th Place. Our Senior Teams achieved their best performances for several seasons.   Nine runners took part in a race of 80.  Spencer Higgins, David Thomas, Paul Evison, James Woodhouse, Johnathan Troop, and David Burrell made up the team of six, which came 5th overall, and were backed up by Paul Barley, Benjamin Briggs and Jimmy Dutch 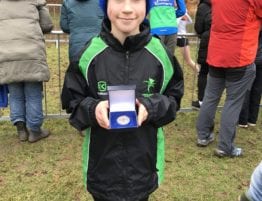